A tree described as reaching 200 ft in height in a wild state, with a trunk 4 to 5 ft in diameter; young shoots shining grey-brown, furnished with short stiff hairs; buds not resinous, ovoid. Leaves very densely arranged, mostly on the upper side of the shoot, the lower ones being the longer, and spreading horizontally; the upper ones shorter, and pointing forward; it is only on weak shoots that any indication of a two-ranked or V-shaped arrangement is seen. The leaves measure 3⁄4 to 11⁄2 in. in length, 1⁄16 to 1⁄12 in. wide, apex rounded and notched; very dark glossy green above, midrib sunken, two whitish stomatic bands beneath. Cones 5 or 6 in. long, 13⁄4 to 2 in. wide, cylindrical or tapered towards the top, reddish brown; scales 11⁄4 to 13⁄4 in. wide, 5⁄8 to 3⁄4 in. deep; bracts conspicuously protruded and bent downwards. Bot. Mag., t. 6992.

Native of the Caucasus and Asia Minor; discovered in 1836 and first distributed in Britain by Lawson of Edinburgh a few years later. It is undoubtedly one of the handsomest and, in most places, best-growing of the firs, although in some places very subject to the attacks of aphis. It thrives in very much the same conditions that suit A. grandis but tolerates more lime in the soil. In foliage it is not unlike the W. American A. amabilis, which has, however, more rounded and resinous buds, and cones with enclosed bracts. Botanically, it stands much closer to A. alba.

At Belladrum, Inverness-shire, there is a remarkable tree 102 ft high, making a fine, narrow, solid column and with incurved, twisted needles. It agrees with the description of ‘Tortifolia’ but is unlikely to be of that clone.

A. bornmuelleriana Mattf. – A species allied to the preceding but with some of the characters of A. cephalonica, notably the resinous buds and glabrous shoots. It has been considered to be a hybrid between them, but if so, the crossing must have taken place in the distant past, since the two species are not in contact at the present time. It has a small range in N.W. Asia Minor, where it forms forests on the Bithynian Olympus. It is distinguished from A. nordmanniana by the characters mentioned, and from A. cephalonica by its emarginate leaves. There are examples of over 80 ft at Dropmore, Bucks., and Gordon Castle, Moray.

A. × insignis Carr. ex Bailly – This name covers the various hybrids that have arisen in cultivation between A. nordmanniana and A. pinsapo. The type form occurred spontaneously in a French nursery and was a seedling of A. pinsapo, but the same cross was made deliberately, also in France, using A. nordmanniana as the seed parent. 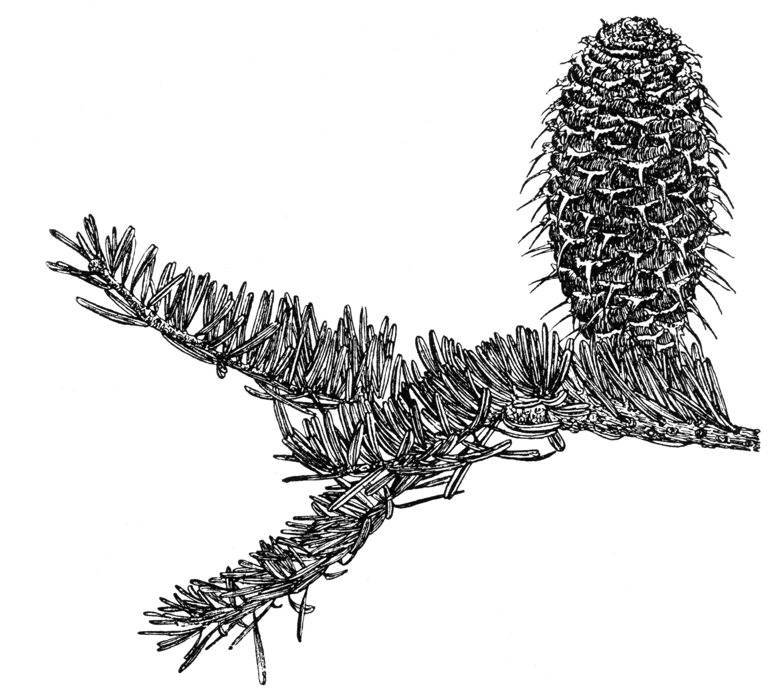 A. bornmuelleriana – Contrary to what was stated on page 161, this fir has an extensive range in northern Anatolia, as far east as about 36° E., where it is separated by only a fairly short gap from the south-western stands of A. nordmanniana. Its leaves are arranged more or less as in that species, but they are more crowded and stiffer, with some stomata on the upper surface, and the winter-buds are resinous. In these characters it resembles A. cephalonica, and Liu subscribes to the view that it is the result of hybridisation between the two species. In Flora of Turkey it is placed under A. nordmanniana as subsp. bornmuelleriana (Mattf.) Coode & Cullen. It might be added that, since A. nordmanniana and A. cephalonica have both been grown in western Europe for well over a century, trees resembling A. bornmuelleriana might be hybrids of cultivated origin.

Immediately to the west of A. bornmuelleriana lies the Mount Ida fir, A. equi-trojani. This, mentioned above under A. cephalonica, is controversially placed under A. nordmanniana in Flora of Turkey as another subspecies, but is really nearer to A. cephalonica and indeed is included in A. cephalonica var. graeca (apollinis) by Liu.

All the species mentioned, and A. borisii-regis, belong to the same section of the genus as A. alba, and form a chain, with A. alba at one end and A. nordmanniana at the other.