A functionally dioecious climbing shrub of vigorous growth; sterile branchlets densely covered with shaggy reddish hairs; flowering shoots more downy. Leaves of the sterile shoots heart-shaped, pointed, from 5 to 8 in. long and from 4 to 7 in. wide; margins set with stiff hairs; upper surface dark green, slightly hairy; lower surface densely clothed with greyish tufted hairs, the midrib, veins, and stalk having larger reddish hairs like those of the young shoots. On the flowering shoots the leaves are shorter and proportionately broader, 2 to 4 in. long, 3 to 5 in. wide, somewhat orbicular, but deeply notched at the top and bottom. Flowers 11⁄2 in. across, at first white, then buff-yellow; produced on short branches from the year-old wood; calyx with five roundish woolly lobes; petals obovate; stamens very numerous. Fruit of the size and shape of a walnut, covered more or less with reddish-brown hairs, and of a very agreeable flavour. Bot. Mag., t. 8538.

This remarkably handsome climber was first brought to the notice of Europeans by Robert Fortune in 1847, when he was travelling in China on behalf of the Royal Horticultural Society. It was later seen by Maries in Japan, but did not reach cultivation until 1900, when seeds were sent from China by Wilson, who had collected it in Hupeh. It is quite hardy and is succeeding well in England where it has borne fruit frequently. Although hermaphrodite forms may exist, fruit is only reliably produced if plants of the two sexes are grown close together. The ‘chinese gooseberries’ sometimes to be seen in greengrocers’ shops are raised from named clones of A. chinensis, mainly in New Zealand. Some of these are available in the trade in this country. These fruits are also known as ‘Kiwi berries’. 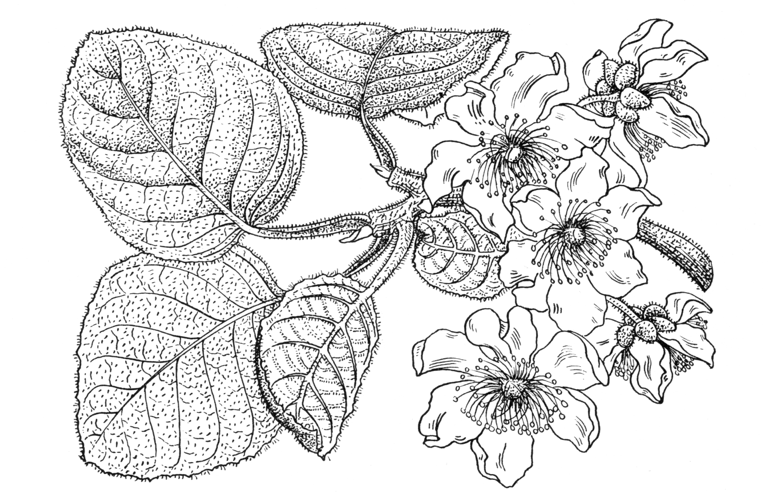 Although hermaphrodite clones of this species exist and have borne fruit, the only way to produce kiwi fruits of good quality is to grow a selected female clone with a male that flowers at the same time. Several clones have been named in New Zealand, the best of which is considered to be ‘Hayward’, which is the main commercial variety. Under plantation conditions one male to five or six females is sufficient, but nurserymen in this country usually offer sets of two females and one male. Insect-pollination is relied on in New Zealand plantations, but it should be borne in mind that complete pollination is necessary for the development of full-sized fruits. The fruits ripen so late in the autumn that cultivation in the open ground is unlikely to be a success in Britain, except in localities and exposures suitable for vineyards. And it should be added that although A. chinensis does not have the reputation for being calcifuge, trials in Germany have shown that an acid soil is essential, since plants become chlorotic at a pH of over 6.

Kiwi fruits are now being grown commercially in the USA and on the continent, and a small crop of good quality is being produced under glass in Guernsey.