A tree 40 to 50 ft high, with wide-spreading branches, and scaly furrowed bark; young shoots first clothed with fine hairs. Leaves ovate, or inclined to oblong; 2 to 41⁄2 in. long, 3⁄4 to 13⁄4 in. wide; long and taper-pointed, mostly heart-shaped at the base, but sometimes rounded or wedge-shaped; sharply, sometimes double-toothed, but often with a large and a small tooth alternating; upper surface dark green, and downy only on the midrib, the twenty to twenty-four pairs of veins deeply impressed; lower surface downy on the veins, vein-axils, and midrib; stalk 1⁄4 to 1⁄2 in. long, downy. Male catkin 1 to 2 in. long, with conspicuous, narrowly ovate, pointed scales 1⁄4 in. long. Fruit-clusters 2 to 21⁄2 in. long; the closely overlapping bracts 5⁄8 to 7⁄8 in. long, coarsely toothed, ovate, with the lower portion on one side doubled over. The nut is covered by a small roundish lobe on the opposite side, which is united to the bract at the base only; in C. cordata the equivalent lobe is larger and more completely united to the bract. Bot. Mag., t. 8534.

Native of Japan; introduced in 1895. It makes, in a small state, a sturdy pyramidal tree, and is evidently very hardy. It is distinct and handsome-looking because of the numerous (up to twenty-four pairs), deeply impressed veins of the leaf. It is one of the species (see also C. cordata) regarded by some authorities as generically distinct from Carpinus, because of the infolded bases of the more crowded bracts of the fruit. There are two examples of this hornbeam at Kew, planted in 1895, the larger 35 ft high with a girth of 21⁄2 ft at 3 ft (1967). 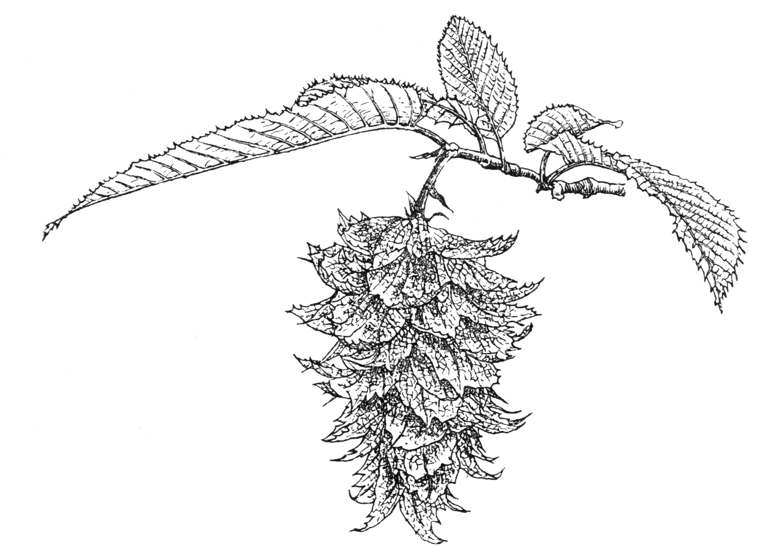