A very vigorous, deciduous climber about 10 ft high, stems strongly ribbed and slightly downy. Leaves composed of three or five leaflets, which are more or less intermediate between those of C. vitalba and heracleifolia. Flowers in corymbs 4 to 6 in. long, springing from the leaf-axils towards the end of the shoot, the whole forming a large panicle 1 to 2 ft long. Sepals four, strap-shaped, pointed, 3⁄4 in. long; at first yellowish white, finally suffused with lilac; half to fully expanded, but little recurved.

A hybrid between C. vitalba and C. heracleifolia var. davidiana, which is widely spread in gardens under the erroneous name of “C. grata”. It is a quick-growing plant with perennial stems, and it flowers with great freedom from August to October. Very suitable for covering old tree-stumps or mounds. It was named after E. Jouin, manager of the Simon-Louis nurseries at Metz.

cv. ‘Mrs Robert Brydon’. – Flowers pale lavender. It is perhaps nearer to C. heracleifolia than is the original C. × jouiniana but the stems are lax and need support. Raised in the U.S.A.

cv. ‘Praecox’. – This variety starts to flower in late July or early August. 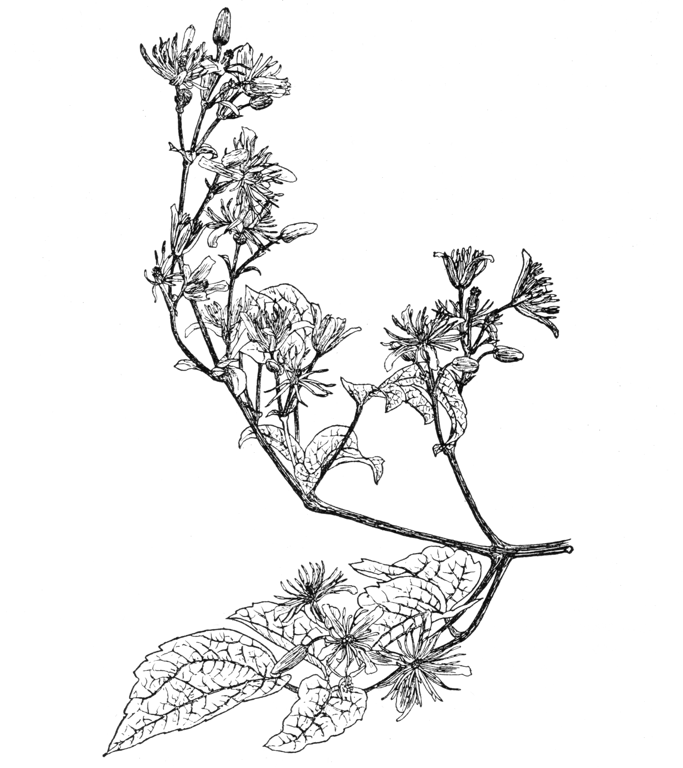 The height attained by this hybrid was given as 10 ft in the first printing of the current edition, as in earlier ones. This is probably its usual maximum, but it has attained 25 ft in a yew at Mount Stewart in Northern Ireland.