A deciduous, thornless tree, 15 to 20 ft high, with crowded branches and a low quaint habit; young branchlets covered with greyish wool. Leaves ovate or elliptical, 21⁄2 to 4 in. long, 13⁄4 to 21⁄4 in. wide, not toothed, dark green above, pale with a dense felt of grey wool beneath, especially when young; stipules hairy, glandular. Flowers 2 in. across, pink or white, each one solitary at the end of a short twig, produced during May. Fruit light golden yellow, pear-shaped, very fragrant.

The native country of the quince, like that of some other commonly cultivated plants, is not definitely known, but most probably it is wild only in parts of the Near East and Central Asia. It has been cultivated in the lands bordering the Mediterranean from time immemorial and has become naturalised in many parts; it was introduced to Britain at an early date.

cv. ‘Lusitanica’. – The Portuguese quince is more vigorous than the type, but not quite so hardy in Britain. The fruit is 4 in. long, 31⁄2 in. wide at the thickest part, tapering thence to the stalk; skin deep yellow, covered with grey down. Flowers large, pale rose, and produced in sufficient abundance to make this variety the best worth growing for ornament. It was named C. lusitanica by Miller (Gard. Dict., 1768).

cv. ‘Maliformis’. – The form of the quince that Miller took as the type of his C. oblonga bears pear-shaped fruits. In this form (C. maliformis Mill.) they are apple-shaped.

cv. ‘Vranja’. – This was introduced from and long grown near Vranja in S. Serbia, Yugoslavia. The fruit is very fragrant, of a clear shining gold, and said to have a softer flesh than most quinces. ‘Bereczki’ is similar.

The fruit of the quince when raw is harsh and astringent, and unfit for food, but it has long been grown in orchards for flavouring apple-pies, ices, and various confections. The pear-shaped form is perhaps the handsomest of all hardy fruits. The quince is largely employed as a stock on which pears are grafted. 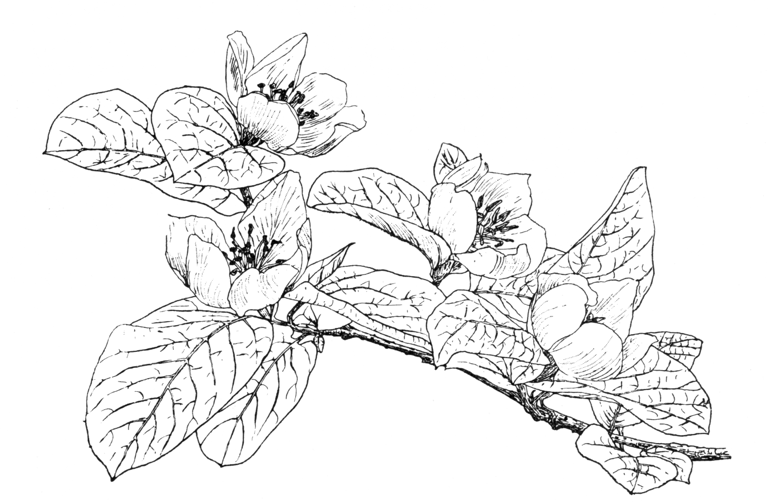