A deciduous, erect-growing tree 50 to 80, sometimes 100 ft high, with a trunk 6 to 9 ft in girth; young bark dark brown-purple. Leaves in a cluster at the end of the shoot, leathery, obovate, 8 to 18 in. long, half as much wide; tapering at the base to a stalk 1 to 21⁄2 in. long; glaucous green above, blue-white and slightly downy beneath. Flowers produced in June, 8 in. across, strongly scented, tepals creamy white; stamens bright purplish red, forming, with the yellow anthers, a conspicuous circular mass 3 in. across in the centre of the flower. The fruit is brilliant red until mature, cone-shaped, rather pointed, 5 to 8 in. high, 21⁄2 in. wide. Bot. Mag., t. 8077.

Native of Japan; introduced in 1884. It attains apparently its largest size in the forests of Hokkaido, where it is highly valued for its light, soft, easily worked timber. One of the most beautiful of all northern trees both in leaf and flower, this magnolia is also quite hardy. When young its habit is open and sometimes rather gaunt.

We are grateful to Mr Dandy of the British Museum (Natural History) for pointing out that the name M. obovata Thunb. is illegitimate under modern rules of botanical nomenclature. The older generation of gardeners knew the species as M. hypoleuca, and this now proves to be the correct name. 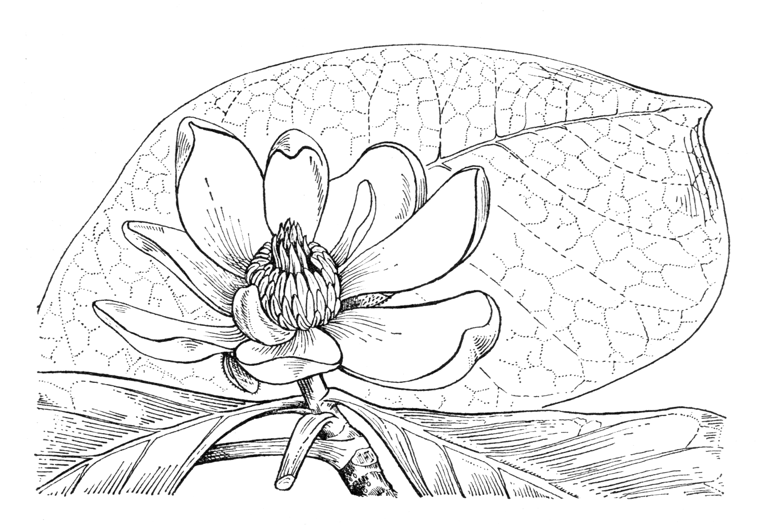 A seedling of M. hypoleuca, raised at the Arnold Arboretum, Massachusetts, from a tree in the collection there, is believed to be a hybrid, with M. tripetala as the pollen-parent. (S. Spongberg, Journ. Arn. Arb., Vol. 57, pp. 272-3 (1976)). The original tree, about 35 ft high, (and its vegetative progeny) has been given the cultivar name ‘Silver Parasol’. Seed has also been distributed through the International Dendrology Society.