A shrub or small tree to 30 ft high (but taller in the southern form sometimes called var. australis). Leaves oval or oblong, sometimes obovate, 21⁄2 to 5 in. long, scarcely half as wide, often blunt at the apex, lustrous green and glabrous above, blue-white and downy beneath, especially when young. Flowers 2 to 3 in. wide, delightfully scented, produced in no great numbers, but continuously, on leafy shoots, from June to September. Petals oblong or slightly obovate, 11⁄2 to 2 in. long, at first creamy white, becoming deeper with age. The fruit develops indifferently in this country, but in the eastern United States the fine red cones produce a bright effect. This magnolia varies in the persistence of its leaves; and of two trees at Kew, growing within a few yards of each other, one retains some ofits foliage all the winter, the other is quite deciduous. Bot. Mag., n.s., t. 457.

Native of the eastern United States from Massachusetts to Florida, often in swampy places. It was one of the early introductions from America, and is known to have been cultivated by Bishop Compton at Fulham Palace Gardens before the end of the 17th century. It is a most charming plant, readily distinguished by its comparatively small leaves, vividly glaucous beneath (but see also M. × thompsoniana). It is, or has been, valued in medicine for its tonic and diaphoretic properties.

In the northern part of its range M. virginiana is a small tree, shedding its leaves in early winter but tending to become more evergreen southward. In the Carolinas and Florida it is sometimes more tree-like (up to 75 ft high), more evergreen, and with densely silky-downy young stems and peduncles. This variant is sometimes distinguished as var. australis Sarg., though it is not well demarcated from the typical state.

M. virginiana is a warmth-loving species that thrives well in the southern and eastern parts of England. One of the finest specimens in the country grows in the University Botanic Garden, Cambridge, and is about 30 ft high and 20 ft in spread. There is a group about 20 ft high at Gravetye Manor, East Grinstead, once the home of the famous gardener William Robinson.

The great merit of this species is that it produces its sweetly scented flowers over a long period in late summer. Against this must be set the fact that it does not flower freely as a young plant. It needs a sunny sheltered position and a deep soil that does not dry out in summer. According to Sargent, it grows better when grafted on M. acuminata than on its own roots. 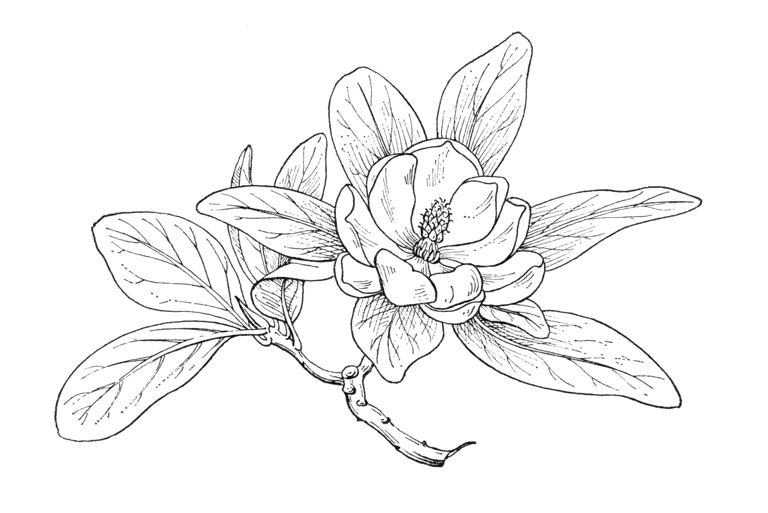 See M. grandiflora in this supplement for hybrids between these two species.