A vigorous, deciduous twining climber, its shoots growing as much as 20 ft in one season, ultimately 40 ft or more high; stems slender, glabrous, grey. Leaves alternate, broadly ovate, heart-shaped or spear-shaped at the base, pointed or rounded at the apex, 11⁄2 to 4 in. long, 1 to 21⁄2 in. wide, glabrous, pale green. Panicles produced in summer and autumn in such abundance as to envelop the plant in a cloud of blossom; they are terminal on lateral shoots, much branched, 8 to 16 in. long. Flowers pale pink or almost white, each 1⁄3 in. across, with transparent ovate sepals in two whorls, the three in the outer whorl winged at the back, the wing passing downwards to the flower-stalk. As these wings persist on the pinkish young seed-vessel, they give it the characteristic three-angled shape. Bot. Mag., t. 7544.

Native of Russia in S. Tadzhikstan; discovered by Dr A. Regel in what was then the Khanate of Baldzhuan, and described by his father in 1883. It has also been found in Afghanistan and W. Pakistan. It was introduced around 1894 by way of the St Petersburg Botanic Garden. It is a beautiful climber, and its value is enhanced by the late date of its blossoming and the beauty of its young fruits. The best way to cultivate it is to give up to it some worn-out tree which it may be allowed to ramble over or envelop at will. Failing that, a stout spruce pole with the side branches left several feet long, or some such support, may be given it. Few climbers give so charming an effect in so short a time. It likes a rich loamy soil and a fully exposed position. Seeds rarely or never set with us, and the plant is best propagated by cuttings. These should be made in summer of pieces of the current year’s growth, with a heel of older wood attached, and placed in gentle heat. Cuttings of leafless wood, made in February with a heel, will also take root.

P. aubertii L. Henry Bilderdykia aubertii (L. Henry) Moldenke – This species, which is closely allied to P. baldschuanicum, was described by Louis Henry in 1907 from a plant growing in the garden of the Paris Museum. This had been raised from seeds received from the French missionary Aubert in the spring of 1899, collected by him in the neighbourhood of Tatsien-lu (Kangting) in W. Szechwan, China. The species also occurs in Kansu and Shensi. The main botanical distinction would appear to be that in P. aubertii the inflorescence-axes are papillose, and that the panicles are narrow, erect and spike-like, borne laterally along leafy stems, while in P. baldschuanicum the inflorescence-axes are glabrous or almost so, and the inflorescences are crowded towards the ends of the shoots, so forming broad, compound panicles. The flowers in P. aubertii are rather smaller than in the Russian species, but there is no reliable difference in their colour. In his original description Henry gave as a further difference that the young growths of P. aubertii are tinged with red. He judged it to be inferior to P. baldschuanicum in its flowers, but the better of the two as a foliage plant, because of its luxuriant leafage.

It has been stated that many plants grown as P. baldschuanicum are really P. aubertii, and that the latter is the commoner in cultivation. If so, a likely explanation is to be found in the fact that the plants raised from the seeds collected by Aubert were distributed without name. It was seven years before Henry published the name P. aubertii, and in the meantime plants may have been identified in other gardens as P. baldschuanicum and further distributed under that name. But the cultivated and naturalised material in the Kew Herbarium does not altogether bear out the statement that P. aubertii is the commoner species. Some specimens have the inflorescence-axes glabrous as in P. baldscbuanicum; others have them more or less papillose – sometimes only slightly so – and presumably represent P. aubertii, though the type of inflorescence more often favours P. baldschuanicum.

P. aubertii grows as vigorously as the Russian species, and can be put to the same uses.

P. equisetiforme Sibth. & Sm. – This species, a native of the Mediter­ranean region, is well worth growing for its distinct growth and abundant milky-white flowers produced in autumn. The plant consists of a dense mass of slender, mare’s-tail-like stems about as thick as a knitting needle and 2 or 3 ft high. It needs a warm sunny corner, and even then is often cut back by winter cold. 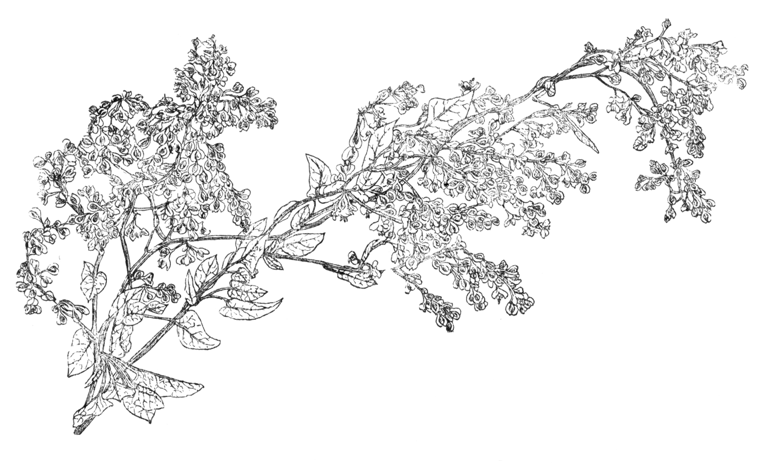 Many authorities consider that the group to which this species (and P. aubertii) belong should rank as a distinct genus. For this the name used until recently was Bilderaykia, but it is now accepted that an earlier name for it is Fallopia Adanson as emended by Holub, who transferred P. baldschuanicum and P. aubertii in 1971. There is no obligation to accept this split, but the name Fallopia has already made its appearance in horticultural literature. The name commemorates Gabriel Fallopius (Gabriello Fallopio), the Italian anatomist (d. 1562).