An evergreen shrub up to 7 or 8 ft high; young shoots slender, purplish. Leaves pinnate, 2 to 21⁄2 in. long; leaflets usually five, sometimes three or seven, the lowest pair very close to the stem; they are of hard texture, glaucous, glabrous, pink-tinged when young, 3⁄4 to 11⁄2 in. long, 1⁄4 to 3⁄8 in. wide, oblong-lanceolate, rounded at the base, tapered to a slender spine-tipped apex; margins set with needle-like spines. Flowers bright yellow, 1⁄4 in. wide, produced about seven together in racemes 3⁄4 to 11⁄2 in. long; stalks slender, glabrous. Fruits egg-shaped, juicy, black, covered with abundant white bloom.

This mahonia was discovered by a Mr Nevin on a sandy plain near Los Angeles, California, and originally named after him in 1895. It is figured in Garden and Forest, Vol. ix, p. 415, and is there described as ‘exceedingly rare … handsome and distinct’. Introduced to this country in 1928, it was first flowered by Mr T. Hay in Hyde Park in March 1931. It is closely related to M. haematocarpa, but the red fruits of that species well distinguish it. To the black-fruited M. fremontii it is also allied, but that species has leaflets broader in proportion to their length, with marginal teeth larger and fewer, and venation more distinctly marked. M. nevinii thrives well at Kew on a wall some yards to the right of the entrance to Cambridge Cottage. 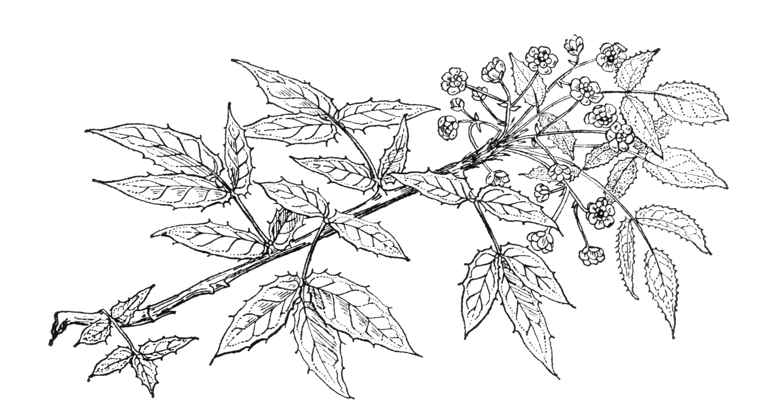