A deciduous tree 20 to 30 ft high, of rugged, picturesque aspect, forming a dense spreading head of branches usually wider than the tree is high, and a short rough trunk; young shoots downy, exuding a milky juice when cut. Leaves broadly ovate or two- to five-lobed, always heart-shaped at the base, and with a short tapered point, coarsely toothed, upper surface rough with short flattened hairs, deep glossy green, lower surface paler and downy. On vigorous barren growths the leaves will be 6 to 9 in. long, and both lobed and unlobed; on fruiting shoots they are 21⁄2 to 5 in. long; stalk 1 in. or less long. Flower-spikes cylindrical, those carrying male flowers about 1 in. long, the females half as long; both on very downy stalks. Fruit clusters oval, 3⁄4 to 1 in. long, dark red, with an agreeable sub-acid flavour.

The black mulberry is, no doubt, a native of one or more Oriental countries, but having been cultivated for thousands of years and naturalised, its original limits have long been obliterated. It is known to have been cultivated in England since the early part of the 16th century, quite possibly long before. It is better adapted for the southern part of Britain than the northern, but is always of slow growth. Although not so good for the purpose as M. alba, the leaves of common mulberry have been much used to feed silkworms upon. The fruits are sometimes eaten at dessert, and they are also made into various conserves and drinks. So far as I am aware, the common mulberry has never produced any variation from the type – a very unusual circumstance in a tree so long cultivated. 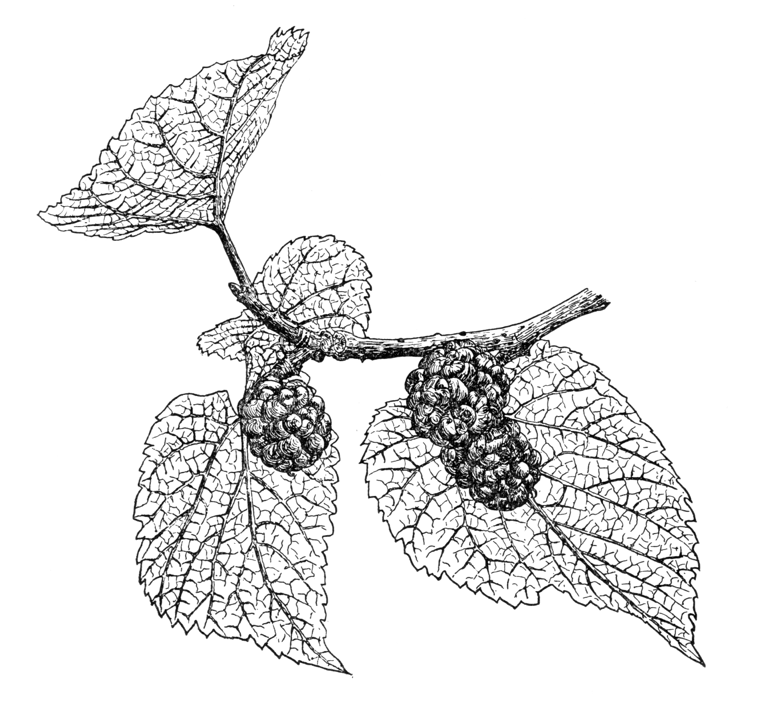 In a recent article Alan Mitchell casts doubts on the longevity of this tree. ‘I think the black mulberry is what it has every appearance of being – a tree of quite rapid growth, great fragility and a short life-span.’ He suggests that the reportedly very ancient trees, most of them without boles, are the result of propagation by truncheons (branches treated as cuttings), and have claim to an age of several centuries only in the sense that they may descend by truncheons from the tree originally planted in the same spot. He records that, at a time when he still believed in the longevity of the black mulberry, he measured a tree at East Bergholt Place in Suffolk, which he estimated to be 300 years old. It had, in fact, been planted precisely sixty-four years earlier, on the day that the owner was born (The Garden (Journ. R.H.S), Vol. 109, pp. 514-15 (1984)).

With regard to the propagation of the black mulberry, the usual commercial method is by layering, though only a few nurseries raise it. It is said that hardwood cuttings strike easily, and this was the method used by Philip Miller in the 18th century, but Graham Thomas tells us he has had no success with them. Possibly the cuttings strike only when taken from young, vigorous plants. Truncheons are certainly a possibility for the propagation of old garden trees, for two of these, four and six inches thick, were rooted at the Forest Research Station at Alice Holt, Hampshire.

The black mulberry is said to be normally dioecious, but sometimes monoecious. This could mean that some individuals are unisexual, others not, or that one and the same tree produces flowers of both sexes in some years, but in other seasons is unisexual. Certainly the black mulberry of British gardens, which may well be a single clone, fruits regularly once established. But considering the behaviour of the common fig in the same family, it would not be surprising if the black mulberry of gardens were able to produce fruit without fertilisation of the flowers. H. J. Elwes recorded in ‘Elwes and Henry’ that the black mulberry produced fertile seed after a hot summer, but that the seedlings raised were weakly (as would be expected in a species that is normally out-crossing).

It seems that the behaviour and propagation of the black mulberry is in need of further study.

Finally it should be added that, according to the late Gerd Krüssmann, the plant usually sold in Germany as M. nigra is really a dark-fruited form of M. alba (the cultivar-name ‘Nigrobacca’ has been used for this, though where it was first published has not been ascertained).