A deciduous tree 30 to 40 ft high, of open, spreading habit. Leaves produced in a cluster at the ends of the branches, pale green, of thin texture, glabrous on both sides, obovate, pointed and with two distinct auricles (or lobes) at the base, extending below the point where the stalk joins the blade; the entire blade is from 8 to 15 in. long, about half as wide; the stalk 2 to 4 in. long. Flowers 8 in. or more across, strongly and not very agreeably scented – at any rate close at hand; produced on the leafy shoots in May and June. Sepals three, oblong-obovate, greenish, larger than the petals, deflexed, soon falling. Petals six, at first pale yellow, afterwards milky white, narrowly obovate, 3 to 4 in. long, at first erect, afterwards spreading. Seeds red, produced on a rose-coloured cone 4 or 5 in. long.. Bot. Mag., t. 1206.

Native of the south-eastern United States; first discovered in S. Carolina, in 1776, by William Bartram, and introduced to England ten years later. This, handsome and distinct tree is distinguished from all other magnolias, except the rare M. pyramidata and the much larger-leaved M. macrophylla, by the auricles at the base of the leaves. The flowers are rather pale, but blend beautifully with the bronze-tinted young leaves. It is well worth growing as a lawn tree. The specific name commemorates John Fraser, who sent to England many North American plants between 1780 and 1810 – including this magnolia.

M. fraseri has attained 68 × 41⁄2 ft at Leonardslee in Sussex, and there is a tree at Killerton in Devon almost as large. At Kew the larger of two examples grows near the Azalea garden, and is about 30 ft high. 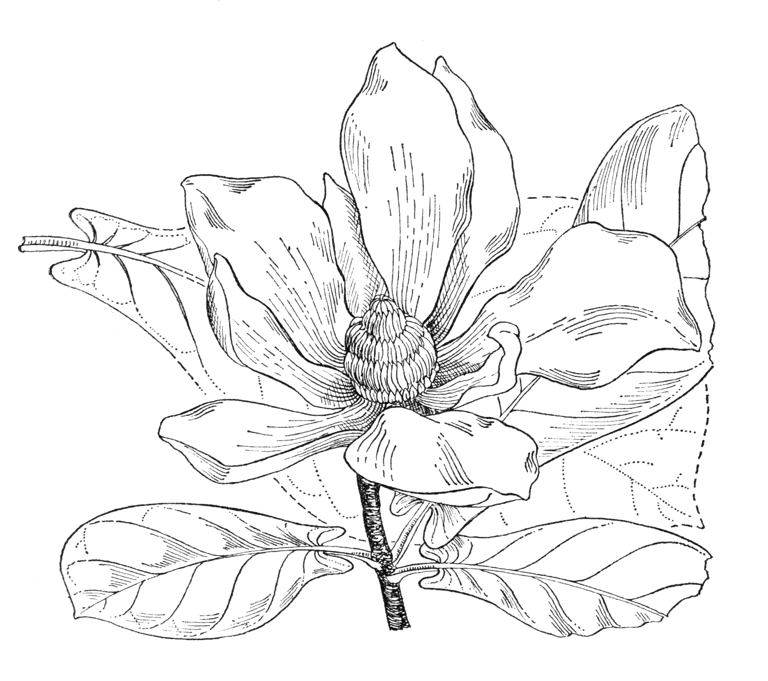