A small tree branching low and of bushy habit, distinct among all other crabs in cultivation through the excessive development of stout, rigid branching spurs on the trunk; young shoots downy. Leaves 2 to 41⁄2 in. long, 1 to 2 in. wide, narrowly oval, tapering or rounded at the base, slender-pointed, very woolly beneath, and more or less so above; stalk downy, 1⁄2 to 11⁄2 in. long. Flowers 1 in. across, white (rosy in bud), produced during May in corymbs of four to nine blossoms; calyx downy, with slender-pointed lobes; flower-stalks 11⁄4 to 11⁄2 in. long, slender. Fruits somewhat pear-shaped, 5⁄8 in. wide and long, dark red with paler dots, the apex marked with the scar left by the fallen calyx. Bot. Mag., t. 7430.

Native of Himalaya; introduced to Kew more than a century ago by Sir Joseph Hooker, who found it in the interior of Sikkim up to elevations of 10,000 ft. It is strange that so distinct and striking a tree has not spread more in cultivation. The original tree at Kew flowered freely, and annually produced enormous crops of fruits. Brandis observes that this crab is scarcely specifically distinct from M. baccata, but as represented at Kew, it is easily distinguished by the low-spreading habit, the excessive development of spurs on the stems, the more woolly leaves and inflorescence, and the smaller pear-shaped fruit. A pleasing lawn tree.

The original tree at Kew no longer exists but the species is still represented in the collection by two trees near the Restaurant. 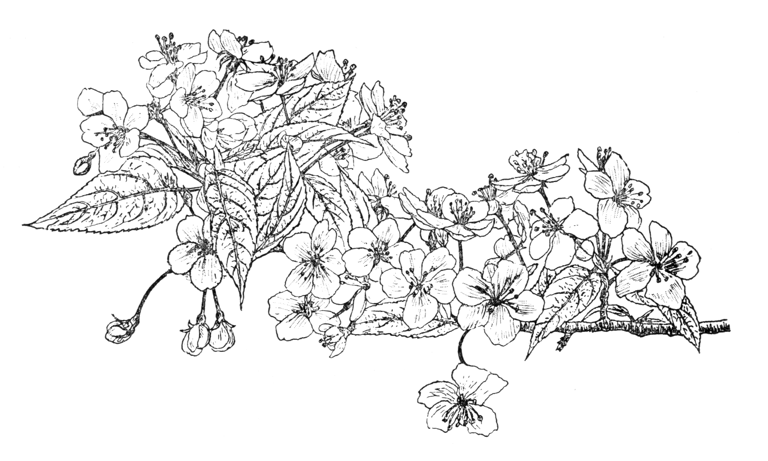 M. sikkimensis is linked by intermediates to M. rockii Rehd., which is included in M. sikkimensis in synonym by Nigel Taylor in the article accompanying Bot. Mag., n.s., t.876. The material portrayed came from a tree raised from Dr Joseph Rock’s no. 23380, collected in north-west Yunnan in 1932, and to this particular form Taylor gives the cultivar-name ‘Rockii’.