An evergreen shrub of loose, rather ungainly habit, as much as 12 ft high in favourable situations; branches erect, not downy, slightly furrowed and but little branched. Leaves produced mostly in pairs, and very variable in size, ranging from 1⁄2 to 21⁄2 in. in length; usually almost orbicular, with a heart-shaped or rounded base; thick and hard in texture, pale or slightly glaucous beneath, the margins with spiny teeth, rarely entire. On the lower, bigger leaves of the branch the stalks are as much as 11⁄2 in. long, but towards the end of the branch the leaves become smaller and the stalks shorter, until finally they are sessile. The leaves and flowers spring from the axil of a small foliaceous, spiny leaf (which corresponds to the spines in other species), and this too becomes smaller as the leaves decrease in size, until, near the apex of the shoot, leaves cease to be borne and tiny spine-leaves alone remain. Flowers borne in April and May, on the shoots of the previous summer in dense, round clusters, 1⁄2 to 3⁄8 in. across, from the axil of each pair of leaves right to the leafless end of the branches; they are bright golden yellow, 1⁄4 in. across; sepals nine, concave; petals six, erect, incurved, slightly notched. Fruit usually one-seeded, blue-black. Bot. Mag., t. 6770.

Native of Chile; discovered by Pearce, and introduced in 1861. In spite of its somewhat ungainly habit it is, when seen at its best, a shrub of striking beauty. There used to be a fine plant in the Coombe Wood nursery, the mother probably of all the plants in cultivation, but a still finer one was in Canon Ellacombe’s garden at Bitton; this was growing against, but not on, a wall, and was 12 ft high. Still it is not amongst the hardiest of barberries, and at Kew is apt to become shabby during hard winters. It is usually propagated by grafting on Mahonia aquifolium or B. vulgaris, but owing to the habit of the stock producing suckers, layering would be preferable.

B. congestiflora Gay, of which the above has been regarded as a variety, is in cultivation from seed collected by Comber in Valdivia province under his No. 973. It differs mainly in its thinner leaves, slightly downy stems, and more congested inflorescence. There are two specimens in the R.H.S. Garden at Wisley, in Seven Acres. 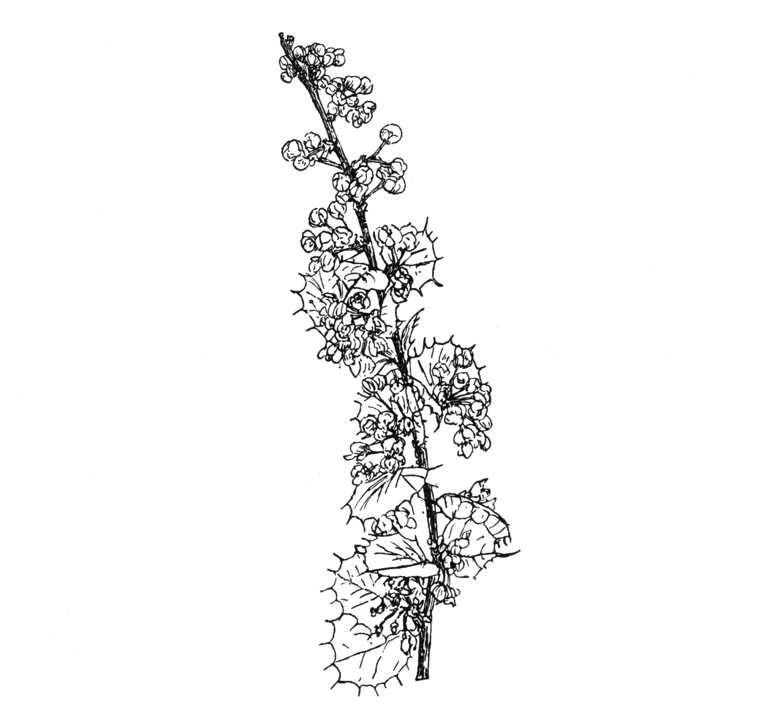 The long-stalked leaves occurring on the lower part of the shoot are of the semi-juvenile type, the stalk being not a true petiole but the rachis of a compound leaf reduced to a single terminal leaflet.