A deciduous shrub 3 to 5 ft high, with erect, round branches covered with appressed down. Leaves trifoliolate, with main-stalks 1⁄4 to 3⁄4 in. long; leaflets 1⁄2 to 1 in. long, obovate or oval, with scattered hairs beneath. Flowers yellow, in erect slender racemes, terminating the shoots of the year, and sometimes more than 1 ft long. Whilst the racemes are themselves leafless, they frequently extend into leafy growth above the flowers. Flowers crowded on the raceme, each one 1⁄3 to 1⁄2 in. long, and borne on a slender, rather shorter, hairy stalk. Calyx some­what helmet-shaped, hairy. Pod 1 to 11⁄2 in. long, 1⁄5 in. wide, hairy. Bot. Mag., t. 8479.

Native of Central and S.E. Europe; introduced in 1730. This broom is very distinct among its kind, because of its long terminal racemes, which commence to open flowers in July, and continue until the end of August. Flowering as it does on the shoots of the current year, it should be pruned in spring before growth commences. It is wise also to remove the racemes when the flowers are over, so as to prevent excessive seed formation. A group of this broom in the front of a shrubbery is very effective but, although quite hardy, it is short-lived in some soils. The flowers turn black when dried, a peculiarity (not confined to this species) on which Linnaeus based the specific name. 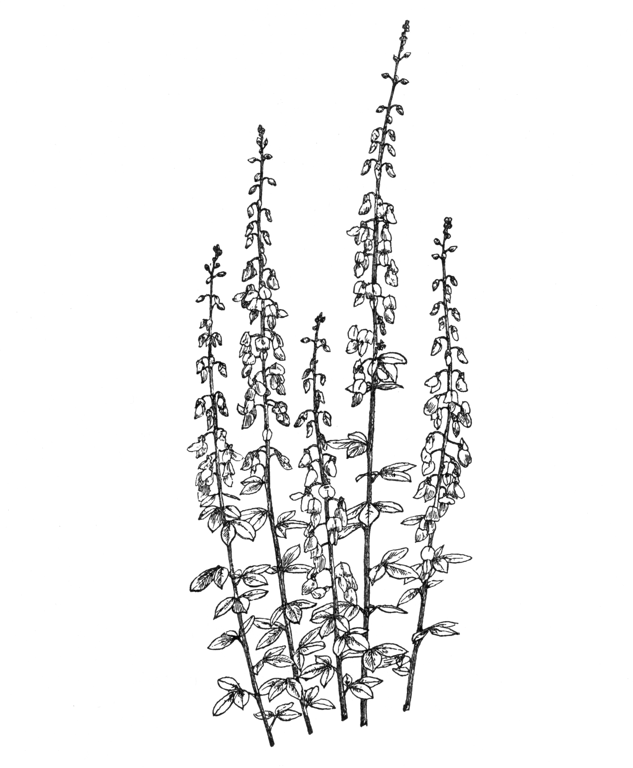