A deciduous azalea, attaining heights of 12 to 15 ft in the wild, bushy. Leaves linear-oval, very tapering at both ends, 2 to 4 in. long, 1⁄2 to 11⁄2 in. wide, at first sparsely bristly, becoming glabrous; upper surface lustrous, hairy on the midrib and at the edges; stalk 1⁄4 in. or less long. Flowers produced before the leaves in early May, four to eight together in a terminal cluster; pedicels up to 5⁄8 in. long, glandular. Calyx very small. Corolla clear pale pink, with a short, bell-shaped base, the limb about 11⁄2 in. across, with five oblong lobes, the upper three spotted with reddish brown at the base. Stamens normally seven, sometimes five or six. Ovary glandular; style sometimes with a few glands near the base. Bot. Mag., t. 8081. (s. Azalea ss. Canadense)

Native of the mountains of western North Carolina; discovered by G. R. Vasey on Balsam Mountain in 1878; introduced to Kew in 1891. It is placed in the same group as the rhodora, R. canadense, but Rehder considered that its nearest relative is the Japanese R. albrechtii. It is a better garden plant than either, being very hardy, free-flowering, and without any fads, growing well in full sun even on quite poor sandy soils. It can readily be raised from seeds, which it ripens in plenty; seedlings with white flowers sometimes occur – f. album Nichols.

The Award of Merit was given in 1969 to the clone ‘Suva’, exhibited by Edmund de Rothschild, Exbury, on May 19. The species as a whole received an Award of Garden Merit in 1927. 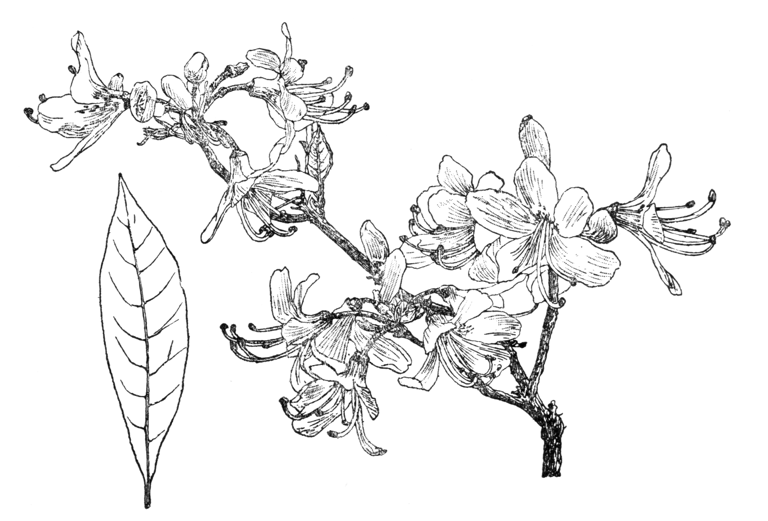