A semi-evergreen or nearly deciduous shrub, ultimately 8 to 12 ft high; stiffly and somewhat thinly branched; young wood slightly scaly. Leaves narrowly oval or obovate, 11⁄2 to 3 in. long, 1⁄2 to 3⁄4 in. wide, tapering at both ends, ciliate and sometimes sparsely bristly when young, bright green above, paler beneath, slightly scaly on both sides; stalk 1⁄4 in. or less long. Flowers produced in one or more clusters at the end of the previous year’s shoots during the latter half of May, each cluster consisting of four or five flowers. Corolla 11⁄2 to 2 in. across, widely funnel-shaped, white, pale blush, pale rose, or pale lavender, with a flare of brown, crimson, or sometimes greenish spots. Stamens ten, hairy at the base. Ovary scaly, style glabrous. Bot. Mag., t. 7614. (s. Triflorum ss. Yunnanense)

Native mainly of Yunnan and S.W. Szechwan, but extending into bordering parts of S.E. Tibet and upper Burma and also found in Kweichow. It was discovered by the French missionary Delavay and introduced by him to Paris in 1889. Messrs Veitch had plants in their Coombe Wood nursery by 1894, presumably raised from seeds obtained from Paris and one of these, received from Veitch, first flowered at Kew in 1897. Later, seeds were sent from China by Forrest, Kingdon Ward, and Rock, and the present garden stock mainly descends from these. In the wild R. yunnanense grows mainly in open places and seems, judging from Forrest’s field notes, to be partial to streamsides. Its altitudinal range is remarkably wide: Forrest’s collections from the Tali range were mostly from around 9,000 ft, a comparatively low altitude for that part of Yunnan, but around Atuntze, near the inner border of the rhododendron zone, he found it at 13,000 to 14,000 ft.

This very charming species is quite hardy, apart from a tendency to bark-split after late frost, when grown in an isolated position. Being by nature a thicket-forming shrub, and of rather gaunt habit on its own, it is best planted in a clump of several individuals or mixed with other scaly-leaved species of the same habit. It varies in the colour of its flowers, but the pure white or blush-tinted forms are really the most characteristic and most desirable. There is also great variation in the colour of the speckling, from light brown or green to crimson. It is easily raised from cuttings, but no clones have been named, which is surprising, considering what a variable species it is.

R.yunnanense received an Award of Merit on May 19, 1904, when shown from the Glasnevin Botanic Garden, Dublin; and an Award of Garden Merit in 1934.

R. hormophorum Balf. f. & Forr. R. chartophyllum Franch. f. praecox Diels – This is really only a form of R. yunnanense with the leaves almost completely deciduous, in the sense that they are almost all shed by the time the new ones develop. Introduced by Forrest, and better known by the synonymous name. The wild plants are sometimes up to 9 ft high or, at the other extreme, have prostrate main stems creeping among or under stones and rocks, with erect branchlets only 1 to 11⁄2 ft high; cultivated plants are usually dwarfer and denser than in R. yunnanense. Award of Merit May 18, 1943, to a white-flowered form, leafless at flowering time, the foliage turning red in autumn, shown by Lord Digby, Minterne, Dorset.

R. rigidum Franch. R. caeruleum Lévl.; R. eriandrum Lévl, ex Hutch.; R. hesperium Balf. f. & Forr.; R. rarosquameum Balf. f.; R. sycnanthum Balf. f. & W. W. Sm. – This species, better known as R. caeruleum, is allied to R. yunnanense, differing mainly in its quite glabrous, bluish-green leaves, glaucous green beneath. The flowers vary in colour from lilac or rosy pink to white, and are more or less spotted. It is fairly widely distributed in Yunnan and is said to be common in the north-eastern part of the province. The most admired form has white flowers, borne in May, and was introduced by Dr Rock under his no. 59207; it received an Award of Merit when exhibited by Lionel de Rothschild, Exbury, on May 16, 1939. 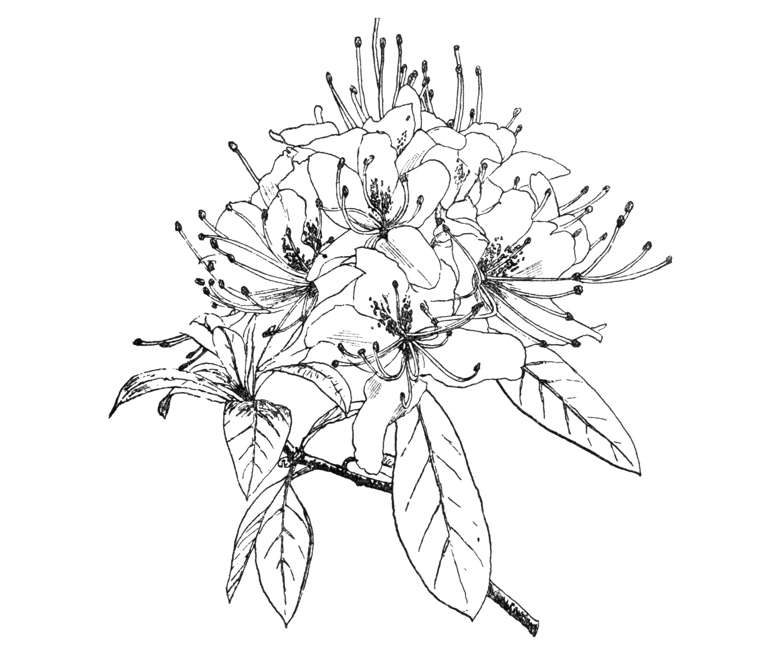 The synonym R. pleistanthum should be deleted (page 809).

R. yunnanense is the central species of the Yunnanense aggregate – ‘a complex of six intergrading microspecies, which are often difficult to distinguish; the characteristics on which they are based are susceptible to great variation which is not always clearly correlated, either among the various characters themselves, or with geography’ (Cullen, Rev. 2, p. 65).

{R. hormophorum} – Included in R. yunnanense, which varies in the persistence of its leaves. But some plants grown as R. hormophorum are R. pleistanthum.

R. pleistanthum Balf.f. ex Hutch. – Included in R. yunnanense by Mr Davidian in his review of the Triflorum series (1963), this is resurrected in the Edinburgh revision, as a species similar to R. yunnanense but lacking bristles on the leaf margin and petioles and with a more northerly distribution.

Apart from this species and R. rigidum, the Yunnanense aggregate comprises R. davidsonianum, R. siderophyllum, given separate headings in the main work, and R. tatsienense, mentioned in this supplement under R. davidsonianum.