A deciduous tree 20 to 30 ft high, with glabrous, dark young wood. Leaves obovate or oval, 3 to 41⁄2 in. long, nearly half as wide, downy in the axils of the veins beneath, doubly round-toothed. Flowers white, 3⁄4 in. across, produced in early April, each on a slender glabrous stalk 1⁄2 in. long, normally in threes from each bud of the previous year’s shoots, but sometimes in pairs or singly; calyx with five rounded oblong lobes, glabrous, often slightly toothed. Fruits heart-shaped, 2 to 23⁄4 in. deep, nearly as wide, or globular with a deep depression where the stalk is attached; the colour in cultivated varieties varies considerably, being of different shades or combinations of red, orange, and yellow.

This tree is presumably a native of China, but does not appear to be known in a wild state. The name P. triflora was given by Roxburgh to a plant growing in Calcutta Botanic Garden early last century. It has long been cultivated by the Japanese, and in 1870 was introduced to California, where its cultivation has developed into an important industry. In this country its ornamental value is about equal to that of P. cerasifera, from which it differs in the shape of the fruits, the more numerous flowers at each node, and in the longer leaves. Whether it will prove worthy of cultivation for its fruit is very doubtful. Probably it requires a hotter summer than ours to develop its best qualities. A.M. 1926 (for its flowers). 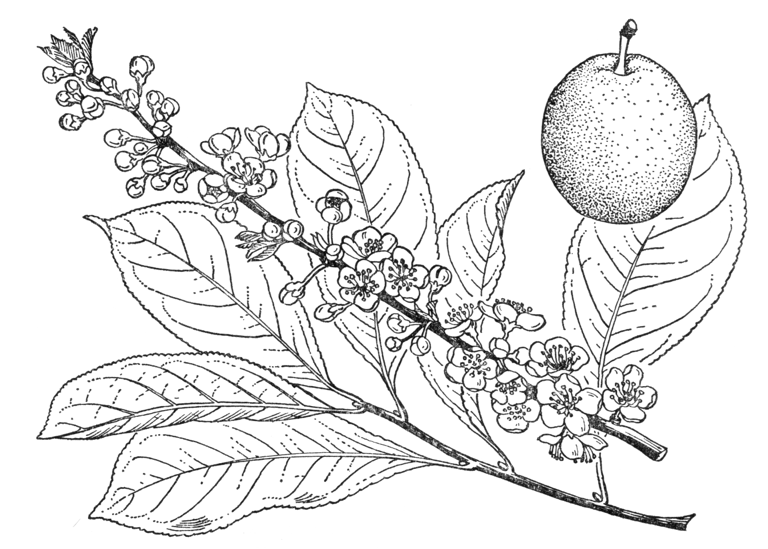