A deciduous tree 40 to 80 ft high in the wild, with a trunk sometimes 3 ft in diameter; young shoots glabrous. Leaves obovate to oval, drawn out at the apex into a long, slender point; rounded, sometimes slightly heart-shaped at the base, sharply toothed, 2 to 4 in. long, about half as wide; quite glabrous on both surfaces, often reddish when young; stalk glabrous, 1⁄2 to 1 in. long, with a pair of glands near the blade. Bracts red, oblong, 1⁄2 in. long, edged with small glandular teeth. Flowers 11⁄4 to 11⁄2 in. across, of a lovely deep blush colour, produced two to six together in short-stalked umbels, each flower with a stalk 1 to 11⁄4 in. long; petals obovate, notched at the broad apex; calyx tubular, with five ovate, pointed lobes 1⁄4 in. long, glabrous and entire; stamens deep rose. Fruit a small black cherry, 1⁄3 in. wide.

Native of northern Japan and Sakhalin. It was introduced to the USA in 1890, when Dr William Bigelow sent seeds to the Arnold Arboretum. Two years later, Prof. Sargent obtained a further supply of seeds from the Agricultural Institute at Sapporo in the North Island of Japan, and a share of these was sent to Kew in 1893, from which plants were raised and distributed to other collections.

P. sargentii is very closely allied to the hill cherry, P. serrulata var. spontanea, but has a more northern distribution and makes a larger tree; its leaves are rather broader, more coarsely toothed, and the inflorescence is a sessile umbel (a corymb in the hill cherry).

This splendid cherry, probably the finest of the true cherries as a timber tree, is also one of the most beautiful in its autumnal colour and blossom. It flowers in April and the leaves turn orange and scarlet in late September and early October. It is propagated by grafting on gean, and on this stock will grow well in any average soil. On its own roots it might be more demanding. In good soil a top-grafted tree should reach 25 ft in height and 30 ft in spread in twenty years. There are numerous clones in cultivation, perhaps not distinct enough to warrant separate naming, but varying in the colour of the petals and in flowering-time. Those that open their flowers together with the unfolding richly tinted leaves make the finest display. A.G.M. 1928.

cv. ‘Rancho’. – of narrow habit, with larger and deeper coloured flowers than normal. raised in the usa and recently introduced to britain.

P. ‘Accolade’. – Flowers deep rosy pink in the bud, opening blush-pink, semi-double, about 11⁄2 in. wide, with twelve to fifteen petals, solitary or in umbels of three on slightly hairy pedicels 3⁄4 to 1 in. long. Calyx bronze-coloured, the tube campanulate, about 1⁄4 in. long; lobes serrated at the apex. Leaves dark green, deeply serrated. A very beautiful cherry raised at the Knap Hill Nursery from seeds received from the Arnold Arboretum, USA, shortly before the second world war. It is a hybrid of uncertain parentage but most probably P. sargentii × P. subhirtella. It is of spreading, open habit and flowers at about the same time as P. sargentii. Award of Garden Merit 1961.

This cherry, raised by Messrs Hillier around 1928, flowers very freely about the middle of April. It makes a broad-crowned tree 25 to 30 ft high and about as wide and usually gives good autumn colour. A.M. 1959. It is a hybrid with P. sargentii as one parent, and was raised from seeds received from the Arnold Arboretum. It is difficult to accept that the other parent was P. incisa, as has been suggested. In its botanical characters it is near to P. × yedoensis and could be a form of P. × juddii (see below).

P. ‘Spire’. – A fastigiate tree eventually attaining a width of 8 to 10 ft, or slightly more, giving fine autumn colour. Flowers soft pink, borne at the same time as those of ‘Hillieri’, of which it is a sister seedling (not a branch-sport as sometimes stated). The original plant, one of many raised from the seeds received from the Arnold Arboretum, was bought by the late Mr John Spedan Lewis and later propagated by Messrs Hillier. It still grows in the garden at Longstock House, Hants, now the property of the John Lewis Partnership.

P. × juddii E. S. Anderson – The typical form of this cross was raised in the Arnold Arboretum in 1914 from P. sargentii, pollinated by a tree of P. × yedoensis growing nearby. The unfolding leaves are not so deeply coloured as in Sargent’s cherry, but are glabrous as in that species. Flowers borne in clusters of two to six on a short common-stalk, white flushed with deep pink. The influence of P. × yedoensis shows in the glandular-serrate calyx-lobes, and in the hairs at the base of the style (in P. sargentii the calyx-lobes are entire, the style glabrous). 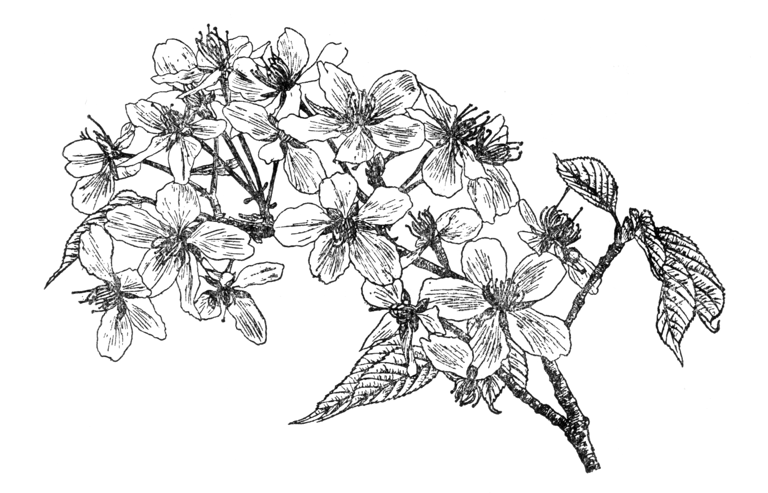